OKLAHOMA CITY – Authorities are still investigating a shooting  that injured several people at a popular spot at Lake Hefner in northwest Oklahoma City.

Shortly before 6:30 p.m. on Thursday evening, police were called to Louie’s On The Lake at Lake Hefner following a reported shooting.

“It sounded like, you know, any kind of restaurant noise, a rack of plates crashing. It was just noise, glass breaking,” Ron Benton told News 4. “But it was followed by a ‘pop, pop, pop’ sound, and a wall of people started making their way to the floor, and making their way around to the backside of the bar.”

Witnesses report that the shooter was near the restaurant and fired at people as they walked toward the doors.

On Friday, Oklahoma City police announced that the suspect, identified as 28-year-old Alexander Tilghman, shot three people inside the restaurant.

In all, officials say there were four people who were injured as a result of the shooting. However, not all of them suffered gunshot wounds.

Family members say the suspect shot Natalie Will, and her daughter, 12-year-old Syniah Giles, as they were walking in front of the restaurant.

Family members tell News 4 that Will was grazed by a bullet and did not require surgery. Syniah was shot near the tailbone area and she spent a couple of hours undergoing surgery.

Jabari Giles, Syniah’s father, said she will spend the next five to seven days at recovering at Children’s Hospital.

His daughter’s friend was also taken to OU Medical Center on Thursday; however, the exact extent of her injuries is not known. On Friday, authorities confirmed that she had also been struck by the gunfire.

“Keep our precious family in your thoughts today as one of our own is recovering from serious injuries after the incident at Louie’s last night. Her friend is recovering as well.”

Another man suffered an injury to his arm as he reportedly tried to run from the restaurant following the shooting.

“He was actually next to me he was lying down. He was worried about his child and his wife that were inside. But he was just lying there. I asked him what happened, he said when he was trying to exit, he broke his wrist,” Vickie said.

Police say all of the victims are expected to survive. 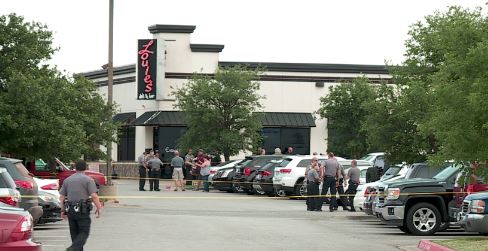 Witnesses told News 4 the gunman was wearing eye and ear protection, leading many to believe that a lot of thought went into the attack.

“He was just a 20-something-year-old kid, I don’t know,” Benton said, “Didn’t look very old. He was wearing ear protection and eye protection that you would have at a shooting range, so obviously he intended to come here and shoot tonight.”

Benton said the shooter appeared to be acting strangely when he spotted him.

“He was just kind of wandering back and forth,” Benton said. “He was, initially when I first picked him up, he was walking as if nothing had happened.”

There were several good Samaritans who took action to either stop the gunman or help those who were injured.

After the victims were shot, Benton said that he saw a citizen with a gun looking for the suspect.

“I spotted the [shooter] walking north up the sidewalk, and pointed him out to the guy who had the weapon, and then there was another guy who had one,” Benton remembered. “They were really screaming. They were like, ‘Stop! stop! stop! Please! Put the gun down! Please put the gun down!’ And I was pointing at him, I was like ‘Down! Put it down! Put it down!’ and they wound up exchanging fire.”

“We heard someone say, this man, yelling, ‘Put down the gun,’ before the second shots,” Morgan, another witness, said.

“Thankfully the only person that is deceased is the person who was trying to harm others, and it looks like others are going to survive at this point. That`s the best thing that we can hope for at this point,” said Capt. Bo Mathews, with the Oklahoma City Police Department.

Morgan said a group of Good Samaritans immediately rushed to take care of the victims before paramedics arrived.

“We were all together treating her when the second round of shots happened and shortly after that someone came around and told us the shooter was down and we stayed until paramedics came,” she said.

Detectives spent hours interviewing more than 100 witnesses who were inside or near the restaurant during the time of the shooting.

“I haven’t been able to process it all yet. Thank goodness there was someone there, a guest, that had a gun and took care of the situation. So we are just really thankful of that person,” said Bob Doggett, who was picking up his family.