WASHINGTON – House Speaker Nancy Pelosi took the momentous step of formally opening an impeachment inquiry into President Donald Trump on a day of stunning and breakneck developments in the Ukraine scandal. 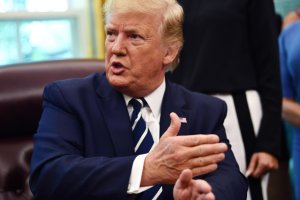 The White House is making its own moves, making public a key telephone transcript and preparing to release to Congress a whistleblower’s report as early as Wednesday, according to two sources familiar. Politico first reported the White House’s intention. One source told CNN the whistleblower report is under review and going through declassification and could be released within hours of the transcript release.

The investigation will test accusations that Trump sought to pressure a foreign power — Ukraine — into effectively intervening in the 2020 election to damage one of his possible Democratic opponents, former Vice President Joe Biden.

“The actions of the Trump presidency revealed the dishonorable fact of the President’s betrayal of his oath of office, betrayal of our national security and betrayal of the integrity of our elections,” Pelosi said in a news conference. “Therefore, today, I am announcing the House of Representatives moving forward with an official impeachment inquiry.”

Trump lamented the news in that it took the focus off his trip the United Nations General Assembly.

“Such an important day at the United Nations, so much work and so much success, and the Democrats purposely had to ruin and demean it with more breaking news Witch Hunt garbage. So bad for our Country!” the President.

Her decision elevates the turmoil and division whipped up by Trump’s two-and-half years in power to historic proportions with massive political stakes for the 2020 election and beyond.

Pelosi, after months of trying to slow walk impeachment demands from her liberal base, elected to strike, despite the President agreeing to release a transcript on Wednesday of a call with Ukraine’s President. Trump says the document will clear him of wrongdoing despite his public admission that he pressured Ukraine to open an investigation into Biden and his son — a fact in itself that his opponents argue is a gross abuse of power.

There is no evidence of wrongdoing by either Joe or Hunter Biden.

Only two Presidents were impeached in the first 223 years of US history — Andrew Johnson and Bill Clinton. Now there is the possibility it could happen twice in the last 20 years, reflecting the fractured state of a nation split down the middle that has been further polarized by Trump’s presidency.

An impeachment inquiry would be the ultimate showdown between House Democrats who believe they were handed power in the midterm elections to constrain Trump, and a presidency that has repeatedly ripped democratic norms and tested the Constitution itself.

Unfolding events
Tuesday’s developments unfolded at staggering speed in Washington and in New York where the President’s “America First” speech to the United General Assembly was overshadowed.

Trump decided to release the transcript under fierce political pressure over claims, first triggered by a whistleblower’s complaint, that he threatened to withhold $400 million in military and security aid to force Kiev to open an investigation into his potential 2020 rival Biden and his son, Hunter.

There is no evidence to support claims — made in public by Trump as recently as Tuesday morning — that the Bidens had corrupt dealings with the former Soviet Republic.

At the United Nations, Trump put forward an alternative, retrospective justification for delaying aid to Ukraine ahead of his call to Zelensky on July 25.

He said he wanted to wait for European nations to contribute their fair share.

Later, the President insisted in a tweet that his decision to provide the declassified, unredacted transcript — opposed by senior aides — would show that there was no quid pro quo offered to Ukrainian President Volodymyr Zelensky.

“You will see it was a very friendly and totally appropriate call. No pressure and, unlike Joe Biden and his son, NO quid pro quo! This is nothing more than a continuation of the Greatest and most Destructive Witch Hunt of all time!” Trump tweeted.

Some senior Democrats however insist that there need not be a quid pro quo for Trump to have committed a “high crime and misdemeanor” needed for a President to be impeached.

The simple fact of a President asking a foreign leader to investigate a domestic political opponent is seen by many legal and political commentators as an abuse of power.

Pelosi’s strategy
In an appearance in Washington, Pelosi warned: “The President is making lawlessness a virtue in our country.”

The House speaker did not specifically commit to an impeachment inquiry in the appearance and it’s possible that the facts of the case will not merit, eventually, a full House vote on the question.

But she shifted her position as a political torrent changed the shape of the impeachment debate in Washington. A number of moderate swing-state Democrats who she had been trying to protect, moved to the impeachment side of the argument.

She said that the nature of Trump’s alleged offense was clear — a factor that might have changed the political equation.

“This is the most understandable by the public. And It’s really important to know this. There is no requirement there be a quid pro quo in the conversation,” she said. “You don’t ask foreign governments to help us in our election. That’s what we try to stop with Russia. It’s wrong.”

Pelosi told her caucus that the impeachment would center around six House committees already investigating the President. It would be up to the Judiciary Committee eventually to decide whether to advance Articles of Impeachment. If the full House votes by simple majority to impeach a President his trial then takes place in the Senate.

There is so far no suggestion, however, that staunch Republican support for Trump in the GOP controlled chamber is waning. That means the two-thirds majority that would be needed to convict the president on Articles of Impeachment and to oust him from office looks at this point unlikely to materialize.

Like Pelosi, Biden also seems to be calculating his political position. As the subject of Trump’s attacks and the Democratic front runner, he is in a unique position in the cascading drama.

In an on camera appearance apparently meant to project presidential gravitas and temperament, the former vice president said that if Trump failed to provide information about the case, he would leave lawmakers with no choice.

“Denying Congress the information, which it is constitutionally entitled to, and obstructing its efforts to investigate actions is not the conduct of an American president. It’s an abuse of power,” Biden said.

“Donald Trump will leave Congress, in my view, no choice but to initiate impeachment. That would be a tragedy, but a tragedy of his own making,” Biden said.

Obstacles
Democratic reluctance to move ahead with impeachment, despite what many in the party see as gross abuses of power revealed by special counsel Robert Mueller, has partly been based on fears of igniting Trump’s base and causing a 2020 political backlash.

Impeachment — that can result in a democratic election being overturned — is the most serious and consequential political maneuver available under the Constitution. It would tear at the fabric of the nation and trigger incalculable results and political forces that could reverberate for years.

In another potentially enormous development, House Intelligence Committee Chairman Rep. Adam Schiff announced that the whistleblower who filed the complaint about Trump’s conduct, wants to speak to the committee.

The whistleblower has requested guidance from acting DNI Joseph Maguire on how to do so, Schiff said. Maguire had been under pressure from the White House and Justice Department not to turn over the whistleblower’s complaint, but that appeared to change late Tuesday, so it was not clear how realistic are Democratic hopes of hearing the testimony.

Trump made the decision to release the whistleblower complaint on Tuesday, a source familiar told CNN. It’s unclear what is behind his change in position, though Pelosi told lawmakers she pressed Trump during a Tuesday phone call to release the complaint.

Two White House officials downplayed expectations for any bombshell revelation in the call transcript, saying it is expected to be “underwhelming.”

One of the officials conceded that makes the release of the whistleblower complaint that much more important. But the official raised questions about the credibility of the the administration employee who filed the complaint about Trump’s interactions with the Ukrainian President, referring to the employee as “the so-called whistleblower.”

Your grocery bill will likely be more expensive this month

BROOKLYN CENTER, Minn. (AP) — A Minnesota prosecutor said Wednesday that he will charge a white former suburban Minneapolis police officer with second-degree manslaughter for killing 20-year-old Black motorist Daunte Wright in a shooting that ignited days of unrest and clashes between protesters and police.

KFOR will livestream the news conference set for Wednesday at approximately 12:15 p.m.

OKLAHOMA CITY (KFOR) - For months, there has been a lot of talk about expanding the state's Medicaid program.

Your grocery bill will likely be more expensive this month

My Pillow CEO says Costco has dropped his products

OESC hosting series of career fairs for out of work Oklahomans

Why some people should return their stimulus checks