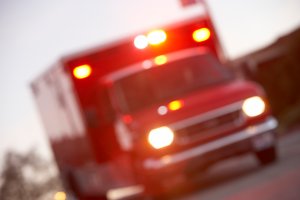 Tonya M. Knapp, 64, was pronounced dead at the scene of the collision on U.S. Highway 270, 2.8 miles east of Seminole, at approximately 4:47 p.m. Wednesday, according to an Oklahoma Highway Patrol news release.

How the collision occurred is currently unknown.

Knapp was driving a 2018 Jeep Compass. She was pinned as a result of the crash. Seminole firefighters had to extricate Knapp’s body from the vehicle, according to the news release.

The crash also involved a 2012 GMC pickup and a tractor-trailer.

The pickup was driven by a Catoosa, Okla., woman. She was transported to the Seminole Hospital Emergency Room and then to OU Medical Center in Oklahoma City. She is in stable condition with head and leg injuries. Her two juvenile passengers, a 12 year old and a 13 year old, were not injured, the news release states.

The driver of the tractor-trailer was treated at Seminole Hospital for back injuries. He was later released.

It was overcast and rainy at the time of the crash, the news release states.