MOORE, Okla. (KFOR) - Police are still looking for two suspects who robbed a jewelry store Thursday night and took off.

Three employees were inside Diamond Dee-Lite Jewelry around closing time when an armed man wearing a hockey mask got out of a car and went inside.

"He had one of the employees tie up the other employees, then he tied that employee up, took their phones, took all the merchandise, then left the store," Sgt. Jeremy Lewis with the Moore Police Department said.

Police say the suspect used zip ties on the employees, while an accomplice was waiting outside in a getaway car.

"[He] sits in right there in the parking lot for about eight minutes waiting on him to come out," Lewis said.

The suspect got away with most of the store's jewelry. Luckily, help was nearby for the employees.

"We had an officer that was literally on the scene as the call came out, just happened to be right there, and we actually had an officer working night school next door," Lewis said.

Investigators tried to ping the stolen cell phones, but say the suspects likely threw them out.

Police have released a photo of a person of interest. He's about 6 feet tall and 175 pounds, wearing a dark sweatshirt.

Authorities are looking for a dark-colored Dodge Charger that the suspects left in. They took off heading east on Southeast 4th. 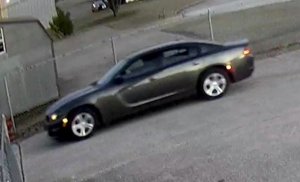 "They were really shook up from the whole incident. It's something we need to get this person [for] — not just the crime of taking the merchandise, but he did a lot of trauma to the victims just scaring them very bad," Lewis said.

(CNN) -- Charles Portis, best known as the author of the novel "True Grit," died Monday, according to his brother.

Portis' brother, Jonathan Portis, told CNN he passed away in a hospice in Little Rock, Arkansas. He was 86 years old.

CUSHING, Okla. (KFOR) - Authorities are investigating after a 40-year-old Cushing man was found dead next to his burning home Monday morning.

Investigators say Patrick McGuire was killed inside his trailer before it was set on fire, and all of it was caught on surveillance camera.