WASHINGTON – President Donald Trump ordered the removal of Ambassador Marie Yovanovitch from her post in Ukraine following complaints by his personal lawyer Rudy Giuliani and others, the Wall Street Journal reported Thursday. 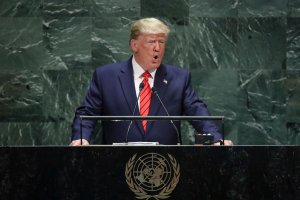 Yovanovitch, who was recalled months earlier than expected in May 2019, was accused by Giuliani without evidence of trying to undermine the President and blocking efforts to investigate Democrats like former Vice President Joe Biden. According to the Wall Street Journal, a person familiar with the matter said that State Department officials were told that her removal was “a priority” for Trump.

At the time of her removal, the State Department said that Yovanovitch was “concluding her three-year diplomatic assignment in Kyiv in 2019 as planned” and that her departure aligned with the presidential transition in Ukraine.

Giuliani told the Wall Street Journal that he had reminded the President “of complaints percolating among Trump supporters that she had displayed an anti-Trump bias in private conversations.” Giuliani told the paper that when he mentioned Yovanovitch to Trump in the spring, the President “remembered he had a problem with her earlier and thought she had been dismissed” and was then asked to provide a list of his allegations about the career diplomat again.

Asked on Thursday morning why Yovanovitch was recalled, Trump said, “I don’t know if I recalled her or somebody recalled her, but I heard very, very bad things about her for a very long period of time — not good.”

The US President had also disparaged the former ambassador to Ukraine in his July 25 call with Ukrainian President Volodymyr Zelensky.

“The former ambassador from the United States, the woman, was bad news and the people she was dealing with in the Ukraine were bad news so I just want to let you know that,” Trump said, according to a White House transcript.

Yovanovitch, a career member of the foreign service and who has served in ambassadorships under three presidents, was sworn in as ambassador to Ukraine in August 2016. Former officials who worked with her praised her experience and ability and the diplomatic community has rallied to support her.