OKLAHOMA CITY-As the city is changing so is the course of the first-class Oklahoma City Memorial Marathon.

With the development of the streetcar system, a new downtown park and so much growth along the course, the organizers of the run are changing to course beginning in the spring of 2019.

The Start Line will remain the same in front of the OKC National Memorial & Museum, but the Finish Line is moving!

The past 18 years Automobile Alley was the final destination for the participants.

The Finish Line for 2019 will be at the corner of Hudson and Sheridan, the southwest corner of Devon Energy.

It will move again In 2020 as the five races of the OKC Memorial Marathon will finish at the new Scissortail Park.

This allows the changing of the course and testing it ahead of the Marathon’s 20th Anniversary in 2020.

Below is a link to the new course 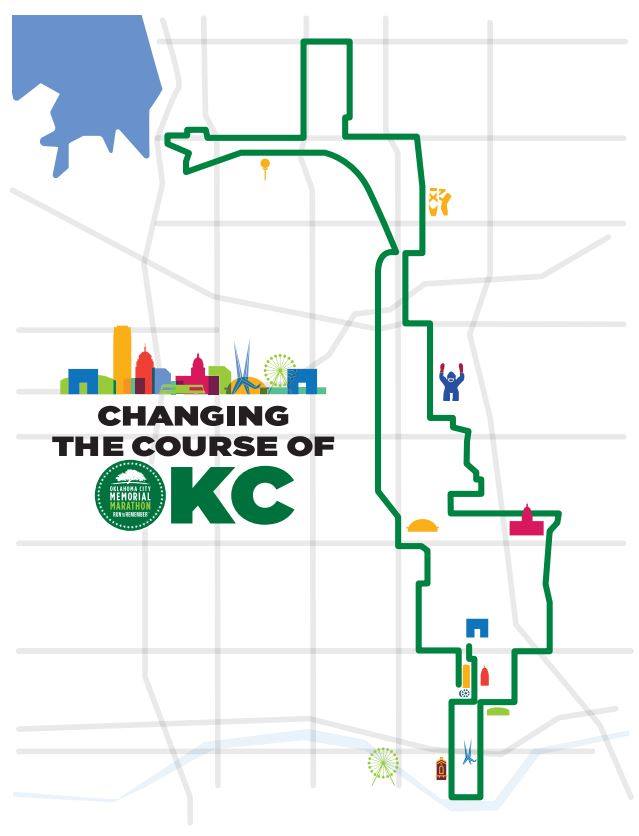 The highlights of the new course include running south on Robinson to Reno, west on Reno to Walker, south over the bridge and past Little Flower Church, then east on Southwest 15th in-between what will be the new Lower Scissortail Park and the Oklahoma River.

Runners will then turn back north on Robinson to see the sun rising over downtown Oklahoma City and then turn east at Chesapeake Arena through Thunder Alley.

The course then resumes the same course as past years along Sheridan to Lincoln. One small change on Lincoln: at 18th Street runners will move to the east lanes and under the 23rd Street Tunnel. Runners will continue along the newly redeveloped 23rd street corridor until Walker, north on Walker then east on 25th. They will stay on 25th and then north on Robinson to Sparrow Park.

Other major changes on the course include Marathoners going along Britton to Pennsylvania, but they will not run to and along Lake Hefner.

The Marathoners and Half Marathoners will run parallel streets (Classen and Shartel) from 18th to 4th street where all runners will rejoin on 4th Street running east, then turn south on Hudson heading to the new finish line just past the crosswalk between Devon Energy and Bank of Oklahoma tower.

This new finish allows the runners to run on one of the widest corridors in downtown and finish just outside Myriad Gardens, where there will be a wonderful outdoor concert, food, Full and Half Marathoners finisher shirts and all of the other amenities needed following a race of this magnitude. They will also be within walking distance to almost every downtown hotel.

The Streetcars and EMBARK busses will be running as well to help move people around Oklahoma City.

There’s also a special incentive for Marathoners and Half Marathoners that want to help us Change the Course of OKC by running both in 2019 and 2020.

They’ll receive a special bib and a special Challenge Coin, as they cross the Finish Line in 2020 in Scissortail Park! The Challenge coin and all the medals are designed and manufactured by MTM Recognition. Take the challenge and help us Change the Course of OKC!

The 5K remains one of the largest 5k races in Oklahoma, and its course will change as well, running through downtown, Automobile Alley, through a downtown neighborhood and crossing the same new Finish Line at Devon.

The Kids Marathon will take a different route this year to avoid construction and the changes to the new Marathon route, but will still be an incredible downtown race among the skyscrapers and end in the beautiful newly redesigned Kerr Park, as it has the past two years.

All of this leads runners to finishing in or near the new Scissortail Park in 2020 where they can enjoy a festival atmosphere and gather with family and friends to celebrate their accomplishments as they #RUNtoREMEMBER.

Of special note, the new course is being illustrated and will be on display in the Devon Tower glass vitrines along the Finish Line on Hudson. Throughout September there will be six different murals installed that will show the new OKC Marathon course. The Marathon and Devon commissioned the artwork by local artist Arjan Jager. Watch the Memorial’s social media for the installation of these pieces throughout September! These murals will stay in place throughout race weekend.

And there’s more motivation to sign up for any of the 2019 races right now – Early bird pricing. The first 500 runners who sign up – with coupon code 2018 – will register at last year’s prices. The discount code expires this Sunday, September 2nd and only 2019 registration prices will be available after Monday, Labor Day.

KFOR is a proud partner to the Memorial Marathon and will broadcast the event live as it has done since the beginning.

LARGO, Fla. (WFLA) — Largo's own Ana Zolotic made history in Tokyo as the first U.S. woman ever to win gold in Taekwondo.

On Wednesday morning, she woke up for the first time in her own bed since taking home the gold medal.

DENVER (KDVR) – A surge in COVID-19 cases fueled by the highly infectious Delta variant is spurring a new round of public health measures aimed at limiting another wave of infections. Public health data shows the surge is particularly strong in states with lower vaccination rates.

Nationally, COVID rates have swung upward since bottoming out at the summer solstice, forcing the Centers for Disease Control and Prevention to revisit mask use guidelines, even for the previously vaccinated.

Sunny Precip: 5%
Close
You have been added to Morning News Newsletter

Humanitarian Respite Center at capacity, asks Border Patrol not to drop off any more migrants