A totally new look, dismantled Thunder team won’t be featured much nationally. OKC will play just three nationally televised games in the 2019-2020 season. That’s down from the 27 they played the previous season.

The Thunder and Nuggets on December 21st when Jerami Grant returns to face off with his old team. Seven days later, OKC will be featured nationally when the Thunder square off with the Bucks.

TNT will show the Thunder just once. February ninth when Russell Westbrook returns to OKC for the very first time since being traded.

The Thunder open the season on the road against Utah on October 23rd and then will feature their home opener on Friday, October 25th against the Washington Wizards.

Despite not playing on Christmas for the first time since 2009, OKC will continue it’s tradition of playing on New Year’s Eve. The Thunder will host the Mavericks that night. The Thunder will play a season high eight home games in December. And it will also feature their longest stretch of home games, five, December 16th through December 26th.

Paul George will make initial return to OKC on December 22nd when the Clippers travel to OKC.

OKC’s longest road trip of the season is four games. The Thunder have to contend with that twice. Once in December and then again in January. 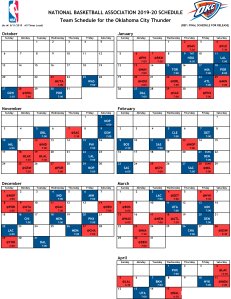 Billy Donovan Reacts to Florida Court Named After Him

The Oklahoma City Thunder returned to practice on Thursday after the NBA All-Star Break, and the local media got their first chance to talk to Thunder head coach Billy Donovan since the court at the University of Florida was named after him last Saturday.

Donovan was the head coach at Florida for 19 seasons, leading the Gators to four Final Fours and back-to-back national championships in 2006 and 2007.

The road to the top of the college basketball rankings, as well as control of the Big 12, heads through Waco this weekend. The top-ranked Baylor Bears will welcome the Kansas Jayhawks to the Ferrell Center on Saturday, with College Gameday in the house.

All12 Courtside’s Mandy Knight reports that the Bears aren’t shying away from the perennial front-running Jayhawks, pointing out that they’re the team setting records this season, achieving a Big 12 record for consecutive wins earlier this week against Oklahoma.

Oklahoma's men's basketball team saw #1 Baylor go on a 23-5 first half run, and a 13-2 run in the second half to pull away and beat the Sooners 65-54 on Tuesday night at the Lloyd Noble Center in Norman.

The win was the 23rd straight win for the Bears to break the Big 12 record for the longest winning streak.