OKLAHOMA CITY – A few familiar faces will no longer be a part of the Oklahoma City Thunder organization.

On Thursday, officials announced that point guard Reggie Jackson had been traded to the Detroit Pistons.

Just woke up from my nap a #Piston #DETROITBASKETBALL!!!

Jackson, who is a backup behind Russell Westbrook, has seen quite a bit of play time this season following a series of injuries.

Jackson has made it clear that he wants to be the starting point guard, but does not have that opportunity with the Oklahoma City Thunder.

He failed to reach a contract extension with the Thunder last year, meaning he would become a restricted free agent in July.

This season, Jackson is averaging 12.8 points, four rebounds and four assists a game.

In 2011, Jackson was a first round draft pick out of Boston College.

Also, center Enes Kanter will be headed from the Utah Jazz to the Oklahoma City Thunder.

In addition, forward Steve Novak will be headed to OKC.

Kendrick Perkins will be sent to the Jazz in exchange for Kanter.

@KendrickPerkins Thank you for everything! Pleasure to work with you! You'll be missed!

Retweet if you will always and forever be #TeamPerk. @KendrickPerkins

While Jackson was happy about the move, Kendrick Perkins was more pensive, reflecting on his time in Oklahoma City.

I would like to start off by saying Thank You to the State of Oklahoma for treated my family and I like Family and we Thank Yall so much!✊✊✊

We are going to miss this wonderful place and all of you guys hold a special place in ours hearts! ThunderUp for life ✊✊✊✊✊

Next I want to send a special Thanks to the Thunder organization and EVERYONE who works in the arena! I will never forget yall! My family

And I have a lot of love for all you guys and we will never take what yall done for us for Granted! Love you all! #ThunderFamily✊✊✊

Once a thunder, always a thunder @KendrickPerkins! Love you boy!! Always!

While Perk and Reggie clearly had different feelings about the trade, Oklahoma City Thunder General Manager Sam Presti wanted both players to know that they were appreciated.

“It is important that we all thank Kendrick Perkins for his contributions to the organization. He had a direct impact on the trajectory of our team and helped us grow immeasurably in ways that will be felt years to come. We also want to thank Reggie Jackson for his contributions and wish him the best of luck as he starts the next phase of his career…”

“We’re extremely pleased to welcome Enes, Steve, D.J. and Kyle. We feel we have added talent, toughness and commitment to our roster and we are excited about the depth and versatility these additions provide,” Presti said in a press release Thursday.

The Oklahoma City Thunder will take on the Dallas Mavericks on Thursday night inside Chesapeake Energy Arena. 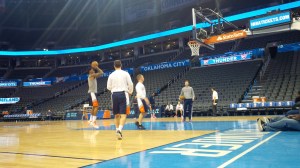 LAS VEGAS (KLAS) -- The NFL and NFLPA are reviewing the Raiders’ recent COVID-19 issues, including a positive test for Trent Brown, who they believe hadn’t been consistently wearing his tracking device. There is also video of offensive linemen hanging out together without masks, per sources.

According to Tom Pelissero, a reporter for the NFL network, it is not unusual for NFL and union to review any situation with multiple positive tests.

The NFL has shifted the Las Vegas game against Tampa Bay out of prime time after several Raiders players have been unable to practice this week because of contact tracing from the coronavirus.

The game in Las Vegas was originally scheduled to be played at 7:20 p.m. CDT Sunday night in the national television window on NBC but now has been moved to 3:05 p.m. CDT in a regional window on Fox.

Oklahoma and Oklahoma State are not expected to contend for a regular season championship in Big 12 women's basketball, with both teams in the bottom half of the coaches preseason poll released Thursday.

Oklahoma is picked to finish seventh and Oklahoma State eighth.

Bird dies at Oklahoma City Animal Welfare, over a year after being seized from home

Target to offer shopping reservations to beat the holiday crowds

Do I really need to wear a mask if I’m 6 feet away from others?

Ho Ho No! Santa Claus won’t be coming to Macy’s this year

Number of OK COVID-19 cases increases by more than 1.6k in 24 hours as hospitalizations remain at all-time high