MEMPHIS, Tenn. – It was a dreary, rainy day in Memphis, Tennessee when two former Big 12 foes faced each other again in the AutoZone Liberty Bowl.

The 8-4 Tigers were nine-point favorites in the game over the Cowboys.

Quarterback Taylor Cornelius was sacked on the first offensive play of the game for the Cowboys. The hit by Terry Beckner, Jr. caused a fumble, but OSU recovered. Following that play, Cornelius completed several passes for first downs and led the Pokes across the field.

Cornelius completed a 30-yard pass to wide receiver Dillon Stoner, who was able to run it into the end zone for the first score of the game. OSU led 7-0 with over nine minutes left in the first quarter.

Oklahoma State gets by with a little help from the ref 😳 pic.twitter.com/xkfbjy1Ub3

When Missouri got the ball again, OSU’s defense was ready. They were able to stop running back Tyler Badie for a loss. The very next play, Cowboys cornerback Rodarius Williams was flagged for targeting when he hit Badie immediately as the ball reached him. Williams was then disqualified from the game.

After Williams was taken out of the game, Missouri quarterback Drew Lock threw a 58 yard pass to wide receiver Emmanuel Hall, which brought the ball down to the six yard line. OSU’s defense was able to stop several running plays, and broke up a pass. The Tigers were forced to settle on a field goal, bringing the score to 7-3.

Throughout the first quarter, the Cowboys struggled to establish the run. However, it wasn’t needed as Cornelius was able to complete passes to a variety of  receivers and maintain the lead.

On Missouri’s first possession of the second quarter, Lock handed off the ball to running back Larry Roundtree III, who went 30 yards for a first down. He was eventually tracked down from behind by corner back Kemah Siverand.

After the big run, Mizzou was able to move the chains several times with a few short passes and runs. As the Tigers got close to the red zone, they turned to Roundtree, who was able to continue to get first downs even after contact with defensive players.

Lock was then able to complete a pass to wide receiver Dominic Gicinto, who was wide open in the back of the end zone for Missouri’s first touchdown of the game.  The Tigers took the lead in the middle of the second quarter with a 10-7 score. 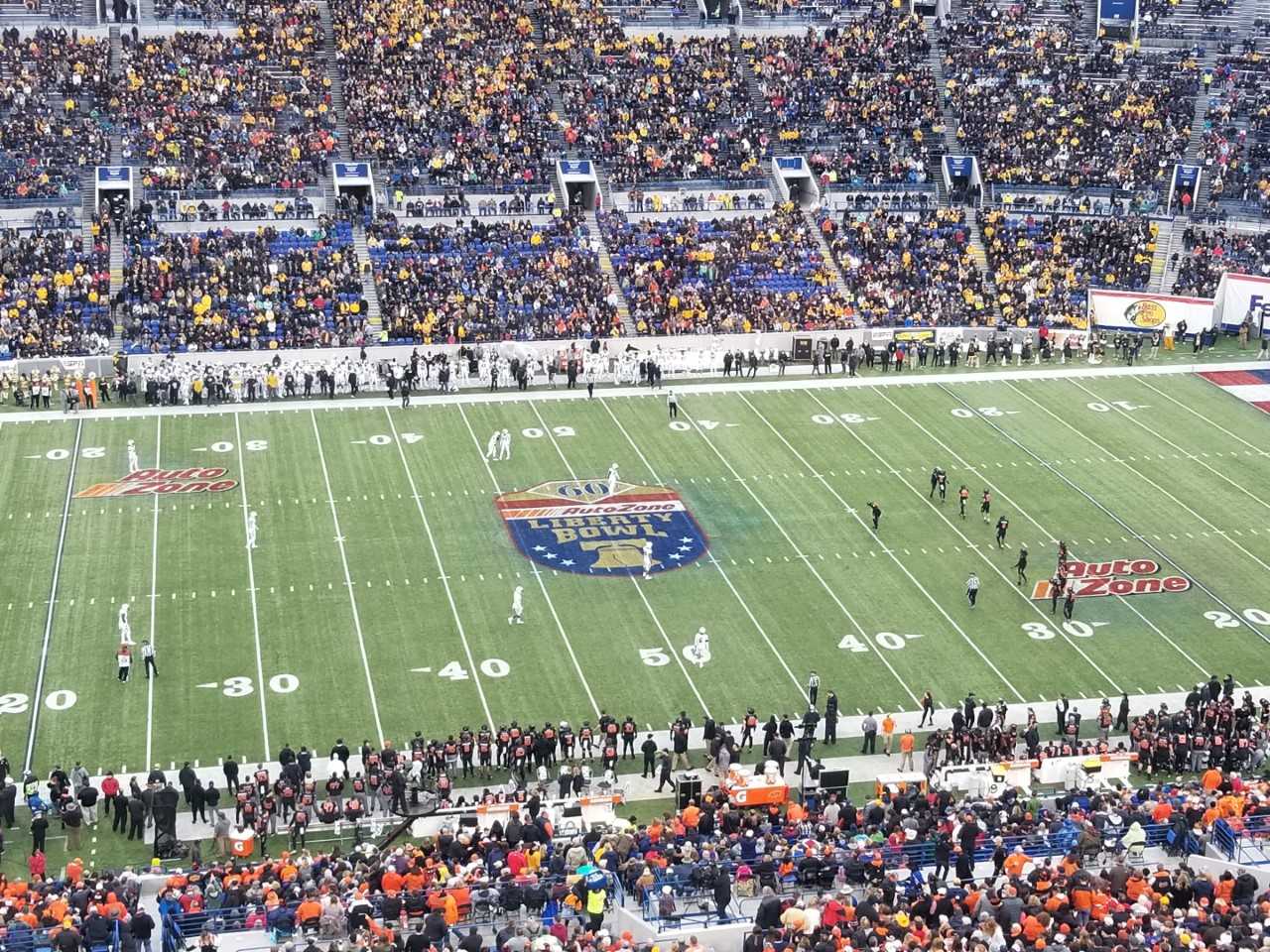 On the first play after the kick, OSU running back Chuba Hubbard was able to run across the 50 yard line before being stopped. The Cowboys looked like they wouldn’t be able to capitalize on the play, but caught a break when Missouri’s DeMarkus Acy was called for holding, which gave them a first down on the 19 yard line.

The pocket collapsed around OSU quarterback Taylor Cornelius, who was forced to keep it and ran for the first down. He was able to reach the first down marker with a major block by wide receiver Tylan Wallace. The next play, Cornelius completed a touchdown pass to Tyron Johnson to regain the lead 14-10 with five minutes left in the half.

The Tigers weren’t done, yet. In fact, it took only five plays for the Tigers to march 75 yards down the field to take over the lead.

Missouri quarterback Drew Lock threw a 25 yard pass to wide receiver Dominic Gicinto, who was brought down by OSU safety Kolby Peel at the OSU 44 yard line. Roundtree was able to pull off a 23 yard run to the 21 yard line. Lock was then able to complete a 16 yard touchdown pass to tight end Kendall Blanton.  Missouri missed the extra point to retake the lead with a score of 16-14.

The teams went into the locker room at halftime with Missouri leading 16-14.

On second and goal, Cornelius completed a 9 yard pass to Wallace in the end zone for another touchdown. On the first possession of the second half, OSU took the lead 21-16.

On the first play of the half for Missouri, Lock completed a pass to Jalen Knox, but a hit by OSU’s Kenneth Edison-McGruder caused a fumble, which was recovered by OSU linebacker Justin Phillips.

The Cowboys handed the ball off to Chuba Hubbard, who ran for two first downs and then trotted into the end zone for another touchdown. OSU’s lead grew 28-16.

Missouri’s next drive was plagued with penalties. The offense was moving the ball down the field, but an offensive face mask call negated some of the progress made by Roundtree and Blanton.

As the Tigers continued to move down the field, Lock completed a pass to Jalen Knox, who ran into the end zone. However, the play was called back for a holding penalty. After several more attempts to reach the end zone, the Tigers settled for a field goal, bringing the score to 28-19.

OSU’s next possession started off with an unsportsmanlike conduct call on the Cowboys, but quarterback Taylor Cornelius completed two huge passes to wide receiver Tyron Johnson for another score. On the first pass, Johnson hauled in a 32 yard completion, then grabbed a 46 yard pass and ran into the end zone. OSU led 35-19.

The pass to Johnson earned Taylor Cornelius a Liberty Bowl record for the most touchdown passes completed in a game.

OSU’s defense was able to stop Missouri as the Tigers looked like they might move down the field. Missouri attempted to go for it on fourth down, but an incomplete pass turned the ball over on downs.

When OSU’s offense got on the field, Hubbard was able to get a first down and a pass interference call on Missouri to end the third quarter.

In the first play of the fourth quarter, Cornelius scrambled as the pocket collapsed and threw an interception to Missouri safety Cam Hilton. On the next play for Missouri, Lock threw an 86 yard touchdown pass to Jonathan Johnson, which was the third longest play in Liberty Bowl history. The score then stood at 35-26.

When OSU got the ball back, they continued to march down the field because of Hubbard who ran for 33 yards. The drive ended when Cornelius was attempting to scramble and threw an interception to Missouri’s Cam Hilton in the end zone.

On the next drive, Lock attempted to throw a pass to wide receiver Dominic Gicinto, who was hit hard by OSU corner back Kemah Siverand. After reviewing the play, the referee determined that Siverand targeted Gicinto and he was disqualified from the game.

The next possession by Missouri resulted in a touchdown as Roundtree ran 55 yards for the score. With less than 12 minutes remaining in the game, the score stood at 35-33.

OSU’s next possession ended in a three-and-out and Oklahoma State attempted a fake punt on fourth down, but didn’t cross the first down marker, turning the ball over on downs at the 32 yard line.

OSU’s defense took a stand and didn’t let Missouri get a first down. When Missouri attempted a field goal, OSU’s Mike Scott  was able to block it and the ball was turned over on downs.

OSU’s offense again turned to Hubbard who was able to run for a pair of first downs. Cornelius completed a pass to Johnson to bring the offense within scoring distance. A pair of incomplete passes caused the Cowboys to settle for a field goal, bringing the score to 38-33 with less than six minutes left on the clock.

Missouri was able to cross the field, and got into fourth down territory near the 26 yard line when Drew Lock threw a pass to Johnson as he was being hit, getting them the first down at the 18 yard line.  Roundtree ran for seven yards to bring the ball to the 11 yard line, which earned him the second most rushing yards in Liberty Bowl history.

With one minute left in the game, Missouri was at fourth and one on the 9 yard line and decided to do a quarterback keeper with Drew Lock. Lock was stopped by just inches short by Edison-McGruder so the ball went back to Oklahoma State.

Oklahoma State had no Cade Cunningham, no Isaac Likekele and virtually no shot to beat sixth ranked West Virginia right? "Avery" moment counted for one Cowboy.

In the first half, Avery Anderson made the most of running the offense. He poured in a pair of layups and followed that with a three as OSU and WVU went neck and neck for most of the first half.

In the first half this game proved to be a neck and neck battle. Brady Manek drilled a big three to keep the Sooners even with Texas. Manek had 13 points giving him back to back double digit performances.

‘You don’t look that sick to me’: Vaccine rollout breeds mixed emotions