OU running back Samaje Perine will have surgery on his left ankle to repair torn ligaments on Monday, January 11, according to a Facebook post by his mother, Gloria Perine. 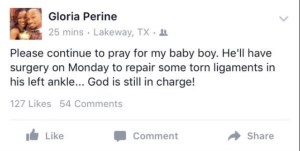 Perine initially went down in the Sooner's game with TCU, then went down again in the Bedlam game, before going down once again in the Clemson game before coming back and eventually leaving the game one more time.

Perine earned his second straight All Big 12 first team vote after rushing for 1349 yards and 16 touchdowns during his sophomore season.