NORMAN, Okla. - One of the Sooners' top stars on the basketball court announced a decision about his future with the team on Friday.

Buddy Hield, a junior at the University of Oklahoma, led the Sooner basketball team to the NCAA Sweet Sixteen this past season.

After the loss to Michigan State, Hield said he would decide whether to stay at OU or become eligible for the NBA draft.

On Friday morning, Hield announced that he would stay at the university for his senior season.

Buddy is coming back for Senior Season pic.twitter.com/68KbXJNxeH

He had been projected by some as a late first round draft pick.

Hield was recently named a third-team All-American by the National Association of Basketball Coaches and the Associated Press.

Those honors were in addition to him being named Big 12 Player of the Year. 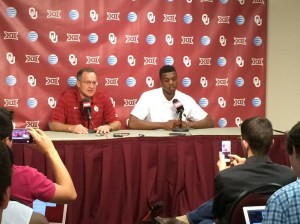 Oklahoma entered their contest with Kansas State dawning the Rough Rider uniforms. And it was rough riding early for OU.

Despite a Charleston Rambo 21 yard reverse play to kick things off, Spencer Rattler threw a pick to Wildcats linebacker Elijah Sullivan. OU's defense didn't blink though forcing a three and out. DaShaun White forcing a big stop on a Skylar Thompson run.

(WCMH) — There will be no public sales of tickets when the Big Ten starts its football season in late October.

Asked about the possibility of ticket sales during a press conference Wednesday, Big Ten Vice President for Intercollegiate Athletics Sandy Barbour said there will be no public ticket sales. According to Barbour, the conference is investigating ways to include family members of players.