The statue was being hauled on the back of a truck down Lindsey Street near the OU campus.

It depicts what appears to be a coach with his hands on his hips, and a visor, Stoops’ signature headwear, on his head. 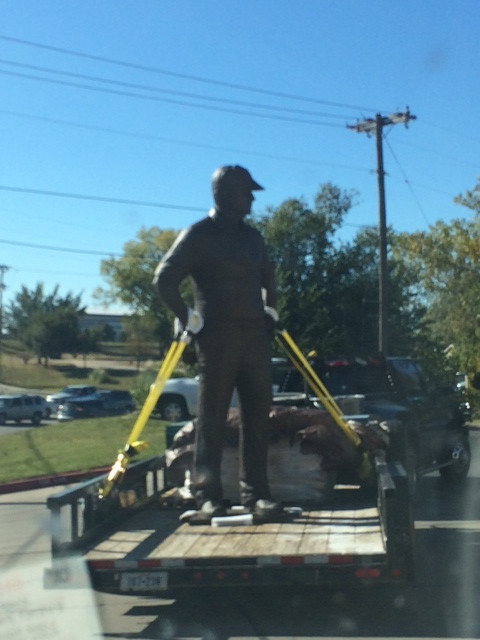 Stoops told the media in 2012 he did not want a statue on campus while he was still the coach, although he had been approached about it.

Maybe OU was putting the statue in storage somewhere, but they certainly didn’t hide what they were hauling very well.

“Several years ago, when we began the process of recognizing our most accomplished coaches, we certainly included Coach Stoops in our planning. While statues of Owen, Wilkinson and Switzer have already been dedicated, Coach Stoops preferred to wait until a later date. Even though approvals of design, sculpting, production and storage took place, it was determined that the dedication would occur at a yet-to-be-determined point in the future. We did not receive any advance notice that the statue was to be transported to campus at this time. Moreover, we are extremely disappointed in the lack of consideration, respect and care that was shown in delivering the statue to Norman. This was completely unnecessary. It certainly is not reflective of the way we feel about Bob or the respect we’ll show him when his extraordinary achievements are properly celebrated.”

As the family, friends and players, and fans mourn the loss of the former Cowboy coach, tributes continue to pour in for Sutton.

Back to the Track: Watch livestream show previewing NASCAR’s longest race, the Coca-Cola 600

Join the Nexstar coverage team for a pre-race show that continues to examine the return to racing in the coronavirus reality we’re all dealing with today. Plus, our team will set the stage for NASCAR’s most grueling race -- 600 miles around the Charlotte Motor Speedway.

Eddie Sutton Dies at the Age of 84

OKLAHOMA CITY (KFOR) - A giant in the college basketball world is gone. Former Oklahoma State head coach Eddie Sutton has died at the age of 84.