The Thunder have announced their Las Vegas Summer League roster as well as their schedule for the week. 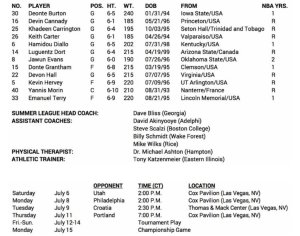 Jawun Evans returns back to OKC after finishing last year on the roster. 2018 draft picks Kevin Hervey, Devon Hall, and Hami Diallo will all play year two for the Thunder.

2019 1st round draft pick Darius Bazley isn’t listed on the roster because he’s not officially with the Thunder. Since Bazley was acquired on draft night, his rights can’t officially go to OKC until the new league year starts July 6th.

As for OKC’s head coach in the summer league, Dave Bliss, it’s not the same Dave Bliss who coached at Oklahoma and Baylor. This Dave Bliss has been with the Thunder organization for a number of seasons and is known as a solid player developer. He spent 2017 in New York with the Knicks before returning back to OKC.